With Carnival just around the corner, in Campania, especially in the Neapolitan area, black pudding cannot be missing: in this article we will tell you the story but we also leave you the traditional recipe.

Carnival is almost upon us: colors, masks, confetti and streamers are ready to give joy especially to the little ones. But not only that: Carnival is also synonymous with confectionery tradition, especially in Campania where the tasty combination of chatter and black pudding is king. If we have said a lot about the chatter in the past, it is on the black pudding that we want to focus today.

The black pudding of Carnival: the history

The latter is a typical Neapolitan dessert with very ancient origins. As the name indicates, this dessert was originally prepared with the pig’s blood which was filtered and then combined with the cacato cream cooked in copper pots. The cream was then added with coffee, cocoa, cinnamon, cloves, raisins, other spices and sugar.

But why was pig’s blood used in particular? The carnival period begins precisely on January 17, the day in which Sant’Antonio Abate is celebrated. The holy anchorite has always been invoked for the healing of the so-called “St. Anthony’s fire”, which was originally treated with pork fat; for this reason the saint has always been depicted in the flames and with a pig next to him. Since 1992, for hygienic reasons, its sale and use was prohibited in Italy to avoid the danger of infections. In any case, the art of Neapolitan pastry chefs was able to find a valid alternative to this ingredient, while retaining its unmistakable taste.

But no more chatter: here is the real and traditional recipe for carnival black pudding (without pig’s blood though). The original recipe provides for the addition of cedar or candied fruit, which can be eliminated if they are not to your liking.

Pour the sugar, flour and unsweetened cocoa into a saucepan and mix with a wooden ladle. Add the milk, vanilla and cinnamon. Mix the ingredients well. Put everything on low heat, stirring slowly and continuously. When the mixture begins to thicken, pour in the dark chocolate cut into small pieces (we recommend using our 100-gram extra dark chocolate bar for a perfect result), making it melt well. When the mixture becomes creamy, add the butter and continue stirring for another 10 minutes. Turn off the heat and let it cool. When the black pudding is warm, add the cedar or candied fruit.

You can add a few drops of your favorite liqueur to give the carnival black pudding a particular aroma. 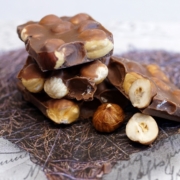 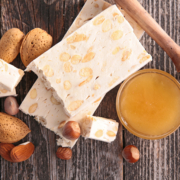 The world in a nougat: all known variants 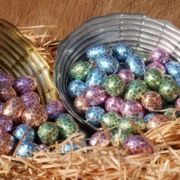 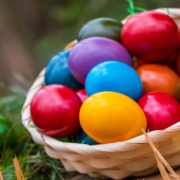 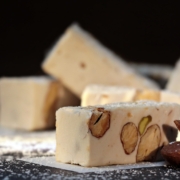 Wine and nougat: tips for a perfect match 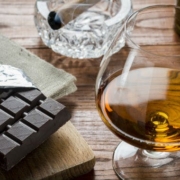 What are the best combinations with chocolate? 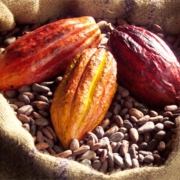 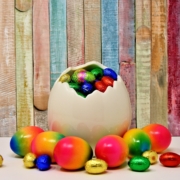 Easter in the world: what are the typical sweets?
0 replies

Want to join the discussion?
Feel free to contribute!

Valentine’s Day, curiosities and anecdotes about the feast of lovers